Wait, do you hear that chink? A traditional and almost forgotten trend is once again making its way into the traditional costume world: the Bavarian charivari. The traditional and decorative chain, which was originally a status symbol for farmers, is now enjoying a growing popularity among men and women. And it is so much more than just an Oktoberfest accessory!

Where did it come from?

The Charivari (spoken: Schariwari) was developed as an accessory for traditional Bavarian fashion. The exact origin is unknown. One legend, however, is that it emerged from the traditional, German watch chain which was gradually embellished with hunting amulets and charms. Also, hunters believed that the strength and qualities of hunted animals where transferred by their trophies to themselves. Back then: a lot of superstition. Today: traditional jewelry.

However, the word origin is known. The French word ?Charivari? came into the German-speaking world when it was Napoleon's time and stood for something like ?racket, noise, spectacle?. This resulted in the German meaning of "clutter". You can see it at our beautiful charivari chains for lederhosen and dirndls just how beautiful such a mess can be. But for now, how are women and men supposed to wear a charivari chain?

How to wear it - Charivari for men

A charivari for men is traditionally worn on the flap of the lederhosen. It is fastened with the help of small snap hooks at the ends of the chain. But beware: please don't just hang it somewhere. Classic lederhosen have a button at the front for the flap and a button for the suspenders. The charivari jewelry can be attached wonderfully to these two (outer) buttons. Lederhosen without buttons for suspenders are often worn with a matching belt. Therefore, you simply hang the charivari into the belt loops with the carabiners. Make sure that the charivari does not hang too low.

How to wear it - Charivari traditional jewelry for ladies

The charivari chain for ladies is much more feminine and mostly with playful hanging pendants. These can be silver figures and shapes such as hearts, deer, edelweiss, pretzels or bows. But coins, rock crystal or horn tips are popular ornaments, too. The lady?s charivari can be fastened with small snap hooks at the ends of the chains.

And that's how it's done:
With the dirndl as well as with the bodice, these hooks are either attached directly to the bodice fabric at the edge of the neckline, or hooked into decorative bodice hooks.

Lederhosen: Since Lederhosen for women become more and more popular, the Charivari can be worn just like with men?s lederhosen. Ladies? are welcome to choose a men?s charivari, too, which usually appears a little bit more rustic.

Earlier, it wasn?t allowed to buy or sell a charivari. Rather, it has been inherited over generations and can therefore be of considerable value these days. But the charivari also served and still serves as a gift for confirmation. Thus, the owner collects the charms himself, e. g. with the hunt or also a lucky charm from the dirndl of his love. But note: a charivari always has an odd number of charms, because an even number would bring bad luck! 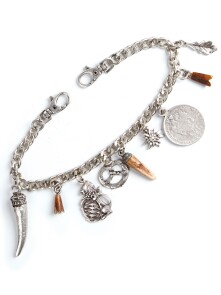